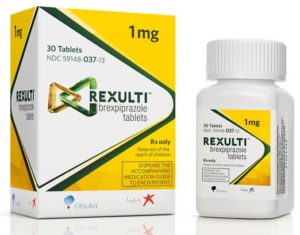 Rexulti, a new antipsychotic drug that Otsuka Pharmaceutical designed as a replacement for Abilify, may increase the risk for similar compulsive behaviors such as gambling, shopping, eating and having sex.

Rexulti (generic: brexpiprazole) is an atypical antipsychotic drug approved for use as an adjunctive therapy to antidepressants for the treatment of major depressive disorder (MDD) and for treatment of schizophrenia. Rexulti is manufactured by Otsuka America Pharmaceutical, Inc., and was approved by the U.S. Food & Drug Administration (FDA) in July 2015.

Abilify and Rexulti are both 2nd generation antipsychotics that belong to the D2 partial agonist class of medications. Both drugs are FDA-approved for the treatment of schizophrenia, and as an adjunct treatment to antidepressants for major depressive disorder (MDD).

Serious side effects of Rexulti may include:

What is Pharma Evergreening?

Critics have pointed to a case of evergreening with Abilify and Rexulti, which are both made by Otsuka America Pharmaceutical, Inc., and work basically the same, although each has a distinct pharmacological profile. Otsuka claims Rexulti is an improvement on Abilify, but this has yet to be proven.

What is Obsessive-Compulsive Disorder?

Obsessive-compulsive disorder (OCD) is an anxiety disorder characterized by uncontrollable, unwanted thoughts and repetitive, ritualized behaviors patients feel compelled to perform. Many patients with OCD are able to recognize that their obsessive thoughts and compulsive behaviors are irrational, but are unable to resist them or break free.

July 10, 2015 – FDA approves Rexulti to treat schizophrenia and as an add-on for major depressive disorder (MDD).